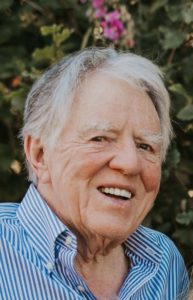 The Jack Schreder Endowment Fund honors Jack’s 65 years of work in education, his contributions and influence in our community during his lifetime. In addition to his strong interest in education, he expanded science education and vocational training in Shasta County.

He was a graduate of Michigan State (B.A. – Economics), San Francisco State University (M.A. – School Administration) and Stanford University (Ph.D – Education and Business). He began his career as a high school teacher and coach in Michigan.

Jack moved to Redding In 1967 to become the first principal at the new 9th grade center, helping to pick the name “Nova” for the unique all-freshman school. Jack recognized the importance of connecting students to school which was critical for 1,200 9th grade students coming together from 23 feeder schools. His shared goal with the teachers was to learn the names of each student in their classes by the end of the first six weeks of the school year.

In 1974, Jack was elected Shasta County Superintendent of Schools at the age of 40, making him the youngest county superintendent of schools at the time. During the next four years, notable achievements included securing the grant funding needed to build science rooms, establishing the countywide bookmobile and being one of the founders of the local Shasta-Trinity Regional Occupational Program. He also obtained initial funding for the construction of the Schreder Planetarium, which was named in his honor in 1979 and has been in continuous operation for schoolchildren and community members in Northern California.

Following his tenure as a school superintendent, Jack became a lobbyist advocating on behalf of the Association of California School Administrators, San Diego City Schools and others. He went on to found, with his wife Kristen, Jack Schreder & Associates, a consulting company specializing in the procurement of funding for the modernization and construction of schools. He continued that work until June 2022.

For over 50 years Jack and his family have been operating a cattle ranch in Igo. In the 1970’s he was a member of the Shasta County Sheriff’s Posse and rode a horse named Jet with the Parade and Drill Team.