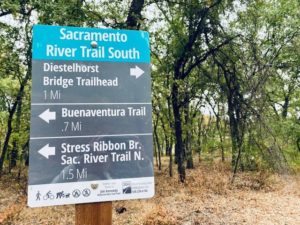 Take a walk on the river trail. Turn left, turn right. Climb up a small incline studded with wooden steps; notice the changing colors of the leaves along this one spot. Stop a minute to catch a slight breeze that picks up along the water line. Go on, explore.

That’s what Jim Kennedy would do. The Redding-native and longtime elementary school teacher, who passed away in November of 2011, spent a great deal of time on the river trail. Often, he was roller blading, gliding up and down a loop from the south entry point, over the bridge and out through Lake Redding Estates.

“He was a little bit of an embarrassing figure for our children, ” said wife Julie Winterscheidt. “He always wore this bright orange nylon vest so people would see him. Then he glued a contraption like a rearview mirror onto his helmet so he could see people behind him. As he skated by, he would pick up people’s newspapers and put them on their porches. He enjoyed being out and, in the community, and wished the trail would go on forever.”

It’s an enduring thought – the infinite nature of the river trail, the community’s access point for exploration of the natural world.

For a while, Kennedy’s family didn’t know exactly how to use the donations that poured into the Community Foundation fund established in his name. But, in 2020 in partnership with the City of Redding, they decided to contribute to the establishment of wayfinding signs spanning a 12-mile stretch of the river trail. These directional signs would prove two-fold: help tourists to the area locate major markers and to improve public safety.

“We have heard reports that some people have not been able to tell emergency services where they are when an incident occurs, often not understanding which side of the river they are on,” said Travis Menne, Community Projects Manager for the City of Redding. “Our overall goal for the signage is to keep people from getting lost and improve the usability of our system for commuters. It also lets us present several types of the same information so different people can use it in different ways.”

Over 17 miles in its entirety, the river trail serves both as a recreational artery and community touchstone for Redding. Its development and expansion have been part of a collaboration between the City of Redding, the Bureau of Land Management, the Bureau of Reclamation and Shasta County.

“We chose this portion of the trail to start with because it was our most heavily used section, with the exception of maybe the Sundial. We wanted to start and work our way into the city,” said Menne.

For many Redding natives, the river trail has served as a memory bank of experiences. Whether fishing, hiking, biking or walking, its accessibility for all ages has meant that these paths helped foster curiosity, imagination, and education. It’s fitting, Kennedy’s daughter Elliott says, that the new signs evoke wayfinding.

“I didn’t know if there would be an opportunity to put his name on it, and I guess that wasn’t my highest priority,” she said. “He taught generations of kids, so now it feels extra special to think about a former student taking a walk or driving a stroller and seeing his name. The language of ‘finding your way’ kind of represents his philosophy as a teacher, but really it’s an encouragement to explore. He always just wanted to see what was going on, and to foster that sense of exploration in others.”

Winterscheidt said she’s grateful to the people who gave generously after Kennedy’s death, and that something real and representative of both Kennedy and the community now exists in a tangible space.

Many of the signs are in place, head west and you will find them, whether next to the curve of a dirt path, or under the heavy branch of an oak tree. Inscribed at the bottom it says, Find Your Way Thanks To: Jim Kennedy Memorial River Trail Fund. It’s small, but worth noticing – as many of the best things are.